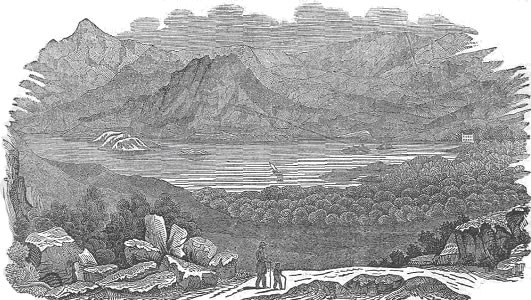 Glengariff! who has not heard of this most enchanting spot? The author of "Sketches in the North and South of Ireland," has pointed out to us the following passages from his work, and we are sure our readers will easily excuse us for preferring it to any thing of our own. Travelling from Bantry to Glengariff, he says,

"And now, having coasted along the bay for four or five miles, we ascended up a clear mountain stream, and entered, by a defile into a mountain valley. The stream here turned to the right, and we could see it writhing like a silver eel through a green valley, that extended under the mountain of the Priest's Leap, and lost itself in the eastern hills, towards Muskerry. My friends excited my curiosity, and caused me to lament that press of time would not allow a visit to a lovely lake in this eastern direction, which lies there in all the retirement of sublime seclusion. But I had Glengariff before me. An ugly hill, an uninteresting view of Bantry Bay, a bad road over a dreary moor—a scene where chatty companions may abstract themselves into talk of other places and other times. In the midst of our chat I became dumb—dispute and argument all fled. "There's Glengariff!" I believe my friends actually contrived to abstract me thus, and engage the mind in other trains of thought, in order to produce effect. They certainly succeeded. I had heard much of this Glengariff—the Rough Glen—Vallis Aspera, as O'Sullivan in his Catholic History calls it. As I passed along from east to west of the county of Cork, every one expressed the hope that I should not leave the county until I had seen Glengariff. I would as soon have gone through Italy, and passed by Rome:—and now I was there—had it all under my eye! And was I disappointed? Not in the least. Nothing in Ireland is equal to it, or can be brought into comparison; it is singular, it is unique. It is a scene that winter has less effect on than could be imagined. I may say it was winter when I saw it—at least winter lingered on the lap of spring—the 25th of March , yet all was grand, and at the same time beautiful, because verdant."

"A bay runs in at right angles from the east and west direction of Bantry Bay. This bay is sheltered entirely at its entrance by an island, on which a Martello tower is erected. Thus the landlocked estuary looks to be a lake. In no respect it differs from a lake, save that it is superior. Here no ugly strand, muddy and foetid, left bare by the receding tide : here no deposit of filth and ooze. No; the only thing that marks the ebb, is a line of dark demarkation that surrounds the bay, and gives a curious sort of relief, (somewhat like the black frame of a brilliant picture) to the green translucent waters of this gem of the ocean. No fresh water lake can be at all compared to it; not even the upper lake of Killarney can stand the competition. Here is the sea—the green, variable, ever changing sea—without any of its defects or deformities I declare I do not know how to begin, or where to take up, or in what way to put forth the dioramic conception I have in my mind's recollection of this delightful glen. Mountains—why you have them of all forms, elevations, and outlines: Hungry Mountain, with its cataract of eight hundred feet falling from its side; Sugar-loaf, so conical, so bare, so white in its quartzose formation; Slieve Goul, the pathway of the fairies; and Esk Mountain, over which I was destined to climb my toilsome way: every hill had its peculiar interest, and each, according to the time of the day or the state of the atmosphere, presented a picture so mutable—or bright or gloomy, or near or distant—vallies laughing in sunshine, or shrouded in dark and undefined masses of shade; and so deceptive; so variable were the distances and capabilities of prospect, that in the morning you could see a hare bounding along on the ranges of those hills, that, at noonday, were lost in the grey indistinctness of distant vision. Then the glen itself, unlike other glens and valleys that interpose between ranges of mountains, was not flat, or soft, or smooth—no meadow, no morass, nor bog—but the most apparently tumultuous, yet actually regular, congeries of rocks that ever was seen. Suppose you the Bay of Biscay in a hurricane from the west—suppose you the tremendous swell, when the topgallant mast of a ship would be hid within the trough of its waves—and now suppose, that by some Almighty fiat, all this vexed ocean was arrested in an instant, and there fixed as a specimen of God's wonders in the deep. Such you may suppose Glengariff. It appears as if the stratifications of the rock were forced up by some uniform power from the central abyss, and there left to stand at a certain and defined angle, a solidified storm. And now suppose, that in every indenture, hole, crevice, and inflexion of those rocks, grew a yew or, holly; there the yew, with its yellower tinge; and here the arbutus with its red stem and leaf of brighter green, and its rough, wild, uncontrolled growth, adorning, and at the same time disclosing the romantic singularity of the scene. I know not that ever I read of such a place, so wild and so beautiful——I think I recollect—Cervantes' description of the Sierra Morena, in Don Quixotte, with all its Ilexes, and oaks, and cork trees. Could it be at all like this? or is it like the grand Chartreuse near Grenoble?

"I will fairly confess to you that I was never more at a loss than how to get on or get out of Glengariff. I know that my poor pen cannot do justice to this scenery, and if you were for half an hour there, you would accord that he must be a felicitous describer, indeed who could convey a suitable idea of this curious valley.—The draughtsman it is true, might catch the character and convey the idea of some insulated spot—the painter might arrest upon his canvass some of those combinations of light and shade that communicate a happy, but changeful glory to some selected scene; but the whole panorama—to convey a suitable representation of it—to impress upon the mind an adequate idea of this singular glen, the pencil, the pallet, as well as the pen, must fail. But, reader, take what I can give— and perhaps the only thing I can give, will be a longing desire of inspecting this beautiful valley with your own eyes.

"I ascended a pathway, accompanied by one who had a painter's eye, a poet's mind, and a heart so harmonized as to be ever ready to rise from the contemplation of nature to look up to nature's God, and say

'These are thy glorious works, Parent of Good!'

We proceeded through woods of oak, birch, holly, arbutus —here ascending precipitous rocks, to gain a bird's-eye view of all around—again we sank into a deep dargle, through which, darkly and far beneath, a river forced its noisy and petulant channel;—again we advanced where the rocks and precipices receded from the stream, and a lovely sunny meadow expanded itself, through which the waters glided, silently and slowly kissing the flowering banks; and all was still,—except that here a heron rose with broad and heavy wing, and shrieked as he ascended from his solitude—and there the water-hen gave forth its scolding note, as it plashed across the placid pool—and from under the fringing alder the sudden trout rising, and springing at the May fly, broke the translucent and glassy surface, with all its reflected images, into shivering and expanding undulations. Immediately around us were enclosing hills, in one place mantled with thick woods, and in another bare, grey, and craggy, except that a yew spread its palmated arms out of this chasm, or an arbutus flung its red rough branches over that precipice, and again the ivy clinging close round that overhanging stratum of rock, seemed to be its only support, binding it up from tumbling in mighty ruin below. Then all around, in the distant, but well-defined circle, were the serrated mountains of every size, shape, and elevation; and to the right, where the mountain formed what is called a gorge, but which the Irish language expresses by a word signifying "a lovely lap;" extended a deep dark valley that seemed to cleave into the very heart of the mountain chain, and which, from where we stood, appeared to have no end to its extent, or bottom to its depth. The sun that had now passed its meridian, was casting its evening rays on the southeastern face of this immense chasm, which was as perpendicular as a wall formed by the line of an artist's plummet: and still this abyss, though two miles off, (as my conductor informed me,) from the clearness of the atmosphere, appeared so near and fine in its outlines, that while the bottom was cast in the indistinct gloom of its own depth, its upper parts, open to the evening light, sparkled in the sun, and presented the very ledge on which eagles for centuries had formed their nests, and reared their young, unapproachable by the common arts or enterprise of man."