It is well known to all our readers that the great monarch, Brian Boroihme, was killed at the battle of Clontarf, A.D. 1014: He left with his son Donagh, his harp, but Donagh having murdered his brother Teige, and being deposed by his nephew, retired to Rome, and carried with him the crown, harp, and other regalia of his father, which he presented to the Pope. These regalia were kept in the Vatican, till the Pope sent the harp to Henry VIII. but kept the crown, which was of massive gold. Henry gave the harp to the first Earl of Clanricarde, in whose family it remained until the beginning of the eighteenth century, when it came, by a lady of the De Burgh family, into that of M'Mahon of Clenagh in the county of Clare, after whose death it passed into the possession of Commissioner Mac Namara of Limerick. In 1782 it was presented to the Right Honourable William Conyngham, who deposited it in Trinity College Museum, where it now is. It is thirty-two inches high, and of good workmanship; the sounding board is of oak, the arms of red sally, the extremity of the uppermost arm in part is capped with silver, extremely well wrought and chiselled. It contains a large crystal set in silver, and under it was another stone now lost. The buttons or ornamented knobs, at the side of this arm, are of silver. On the front arm, are the arms chased in silver of the O'Brien family, the bloody hands supported by lions. On the sides of the front arm, within two circles are two Irish Wolf Dogs, cut in the wood. The holes of the sounding board, where the strings entered, are neatly ornamented with an escutcheon of brass, carved and gilt; the larger sounding holes have been ornamented, probably with silver. The harp has 28 keys, and as many string-holes, consequently there were as many strings. The foot piece or rest is broken off, and the parts round which it was joined are very rotten. The whole bears evidence of an expert artist. 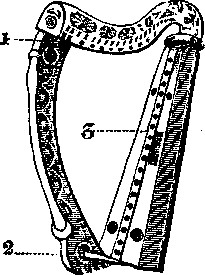 The three figures which our wood-cutter has attached to the harp are intended to represent, No. 1, two iron straps; No. 2, a piece of brass; and No. 3, a piece of paper, which as permission was refused to open the glass case in which the harp is kept, it could not be ascertained for what purpose it is there.