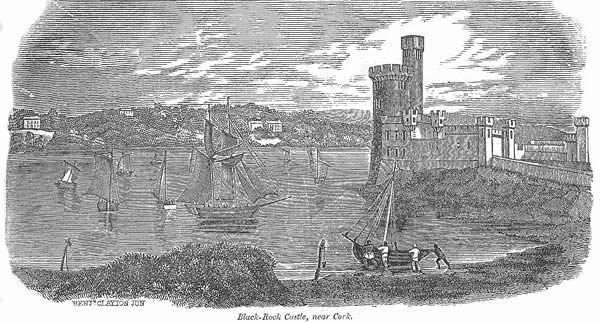 THE Castle of the Black-Rock was first built by the Lord Mountjoy, in the beginning of King James First's reign, when the fort of Hallbouling was erected for the defence of the harbour. In the year 1722, the city expended the sum of £296 upon this tower, and made a very handsome octagon room in it, from whence is a delightful prospect of the harbour from Passage to Cork. In it the mayors of Cork hold an admiralty court, being by several charters appointed admirals of the harbour, which in the year 1627 was contested with them, by one Edward Champion for the Lord Barry. On the 1st of August, it is usual for the mayor and corporation to have a public entertainment here at the charge of the city.

Nor ought we to forget a neat garden and improvement of Mr. Daniel Voster, with fountains, statues, and canals, and a pretty house, seated on a hill half a mile from the city, (on the north side, opposite Black-Rock,) having a prospect of Cork, the harbour and adjacent country. Mr. Voster settled several years ago in Cork, being by birth a Dutchman; many of the merchants of the city have been educated by him in writing, arithmetic, and the most regular method of "bookkeeping, and several of them, formerly scholars to Mr. Vorster, were so sensible of his worth, that they gave him an annual public entertainment in the council-chamber of the city: a laudable practice, and anciently followed by the old Greeks and Romans to their greatest masters.
On the north side of the river the banks are high, and in some places inaccessible, composed of a mellow clay, over a slaty rock of various colours, some red, others of a deep purple and sky colour, used for building.