The Quay of Waterford. 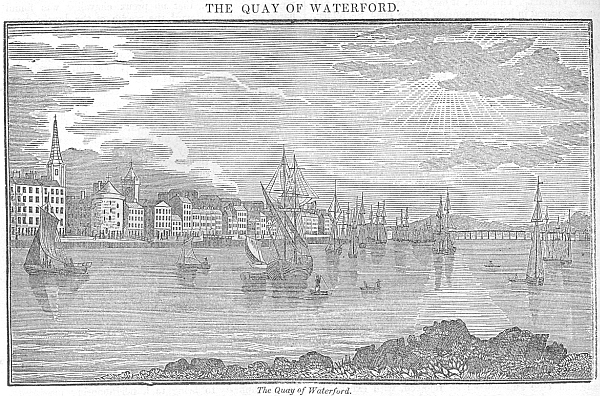 The Citizens of Waterford are justly proud of the beauty of their Harbour, and still more of their Quay, which is not rivalled by anything of the kind in Ireland. It is an English mile in length, and presents a continued line with scarcely any interruption throughout its entire extent, a portion adjoining the river being divided off from the carriage way the whole length of the Quay, and forming a truly delightful promenade, such as few cities can produce. Of the general effect of this beautiful object, our prefixed illustration will convey some idea, but the natural beauty of the surrounding scenery must be seen to be properly appreciated. The Suir is a magnificent river, affording a depth of water, varying from twenty to sixty-five feet at low water; and vessels of nearly 800 tons may come up close to the Quay, a circumstance which has been found peculiarly favourable for the embarkation of cavalry and military stores. The opposite banks of this noble river are connected by a wooden bridge of modern erection, which greatly adds to the interest and picturesque effect of the scene. Of this bridge we extract the following account from the excellent history of Waterford, by the Rev. Mr. Ryland. The wooden bridge connecting Waterford and the County Kilkenny was undertaken in 1793, by a company, (incorporated by act of Parliament), who subscribed £30,000 to complete the work, including the purchase of the Ferry. The money was raised by loans of £100 each, the interest of which was to be paid by the Tolls of the Bridge. The work, having been completed for a less sum than was originally estimated, only required the payment of £90 on each debenture. The erection of a bridge has eventually become a good speculation; the debentures now sell for £170, and the company have a sinking fund, already advanced to a considerable amount, to repair or re-build the bridge as may be necessary. The Tolls for the present year (1824) let for £4,260.

The present Bridge was built of American oak, by Mr. Cox, a native of Boston, who also erected the magnificent bridge over the Slaney, and those of Derry, Portumna, and Ross. Cox advised the Proprietors of the Waterford Bridge to case one of the piers with stone until the whole were completed; but his advice was not followed.

Two tablets, affixed to the centre piers, give an account of the manner in which the foundation was laid, the date of the erection, and the materials of which it was composed. The inscriptions are as follows:--

In 1793,
A year rendered sacred,
To national prosperity
By the extinction of religious divisions,
The foundation of this Bridge was laid,
At the expense of associated individuals
United by Parliamentary grants,
By Sir John Newport, Bart.,
Chairman of their Committee.
Mr. Samuel Cox,
A native of Boston, in America,
Architect.

On the thirtieth day of April, 1793,
This Bridge was begun.
On the eighteenth of January, 1794,
It was opened for the passage of carriages.
It is 832 feet in length, 40 in breadth,
Consisting of stone abutments,
And forty sets of piers of oak.
The depth of water at lowest ebb tides 37 feet.

This work was completed, and the Ferry purchased, by a subscription of thirty thousand pounds, under the direction of the following Committee.

The Quay of Waterford is the place of residence of many of the chief merchants of the City, but its most interesting architectural feature is an ancient castle, called Reginald's Tower, and corruptly the Ring Tower, which is probably the most unquestionable remain of the Danish power, and one of the most curious monuments of its kind now to be found in the kingdom. This castle was also known by the Irish name of Dundory, or the King's Fort.

Its size and form, which like all the ancient castles of the British islands, previous to the arrival of the Normans, was circular, will be best understood by the annexed view, and its history is thus briefly, but not inaccurately summed up in the following inscription, on a tablet placed over its entrance doorway.

In the year 1003, this Tower was erected by Reginald the Dane--in 1171, was held as a Fortress by Strongbow, Earl of Pembroke--in 1463, by statute 3d of Edward the 4th, a Mint was established here--in 1819, it was re-edified in its original form, and appropriated to the Police Establishment, by the corporate body of the city of Waterford. 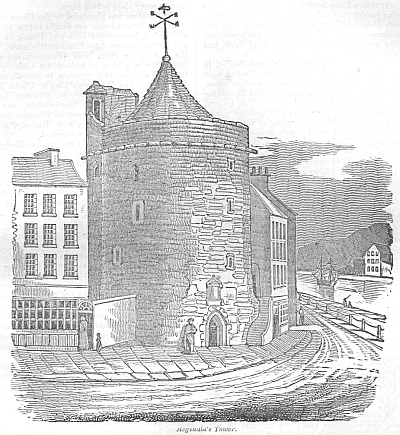 Reginald's Tower, as stated in the above inscription, has been applied to many and various purposes; but there is one use not mentioned which should not be forgotten, namely that of a Prison. After the successful storming of the town, by the English forces of Earl Strongbow--led on by the redoubtable Raymond le Gros--in 1171, when the city was plundered, and all the inhabitants found in arms were put to the sword, Reginald, Prince of the Danes of Waterford, and Malachy O'Faelan, Prince of the De-cies, with several other chiefs who had confederated to resist the invaders, and were made prisoners in the combat, were imprisoned in this Tower till their ultimate fate should be determined on. They were condemned to death --but saved by the intercession of Dermot Mac Murrogh, who with Fitzstephen, and many other English and Welsh gentlemen, came to Waterford to be present at, the marriage of Earl Strongbow with Eva, the King of Leinster's daughter.

We have thus briefly noticed one of the most distinguishing features of this ancient and distinguished city,--its general history, as well as notices of its several public institutions, would exceed the limits allowable in a single number of our little work; but they shall appear in the succeeding numbers.