History of the University of Dublin (Trinity College) 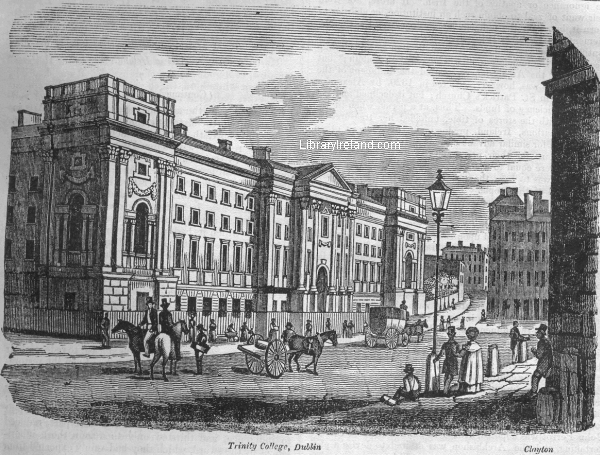 It is difficult to analyse with accuracy, the feelings which pervade the mind, on the contemplation of those edifices which have been erected by the piety and munificence of our ancestors, for the improvement of the moral, the social, and political condition of mankind. The very barbarism from amid which they rose, tends to heighten the solemn feeling they invariably inspire. We consider them as the depositories of knowledge, when all around was sunk in the darkness of ignoiance, and we respect them; we consider them, through the successive gradations of ages, still advancing moral science and philosophic truth, and we venerate them the more. There is, besides, a feeling in the heart, which connects us indissolubly with the past. What endears that past to a nation?--The reputation of the great men it has produced.--What can excite a deeper interest for institutions such as these, than the reflection that it is to them we owe that fame which genius has won, or learning has acquired. Of what materials must his character be composed, who does not feel his best sensibilities awakened--his piety animated--his thoughts dignified, and his moral tendencies strengthened, by the consideration of structures erected for purposes so ennobling and so dignified as these. It is, however, asserted, that we reverence them less for their objects than their antiquity. Man is the creature of system and of habit, and as of that which is established the advantages are known, and as every age has given fresh authority for respect, institutions of this nature, it is said, exact esteem, not from our conviction of then present benefit, but from the hallowing influence of time. Antiquity--if antiquity be considered like "every other quality that attracts the notice of mankind," has undoubtedly votaries; but votaries that reverence her more from prejudice than reason. Her circle is, however, limited, and her worshippers are few; for admiration of this nature is rather the result of ignorance than refinement, as antiquity can only be exalted from its connexion with the history, the interests, and improvement of mankind. Now, as Colleges are the immediate promoters of these, when antiquity displays the influence they have exerted on the past, her claims are admitted, her influence is felt--she blends herself alike with our imagination and reason, and her power is at once venerated, acknowledged, and despotic. The establishment of Colleges and Halls may be traced to that devotional sentiment which induced the affluent to endeavour to propitiate heaven by the erection of edifices, where the sacred principles of religion might be inculcated, and its truths advanced. As the dark clouds of ignorance rolled away, they shed the light of revelation on mankind. They reclaimed him from an impure and mystical religion, and inculcated the Christian worship of his Creator. "They collected the learned who were few; and made them a compact and honourable confederacy against the ignorant, who were powerful and many. They gave rise to the plan of collective exertion and emulative industry, which advanced the energies of the mind, and encouraged the progress of discovery, and they supplied a continual growth of cultivated talent for the demands of successive generations, They treasured the materials of knowledge, saved from the wreck of that moral world which had been passed over by a desolating ignorance, and arranged them as the bases of new acquisitions." Such were the advantages consequent upon the foundation of Universities, advantages alone equalled by the benefits they have progressively conferred. Trinity College does not, perhaps, as a literary curiosity, present to us that extreme antiquity which would give to it the charm of its perspective. But it has age enough to make inquiry interesting, and sufficiently moral circumstance to render its history instructive. The past has given it splendor--the future is radiant with hope; it arose from the liberal policy of a Princess--it has been enriched by the mental energies of its sons. Limited as the enquiry must necessarily be, it is presented as a tribute to a country, where genius has ever loved to dwell, and whence, history avers, that much of learning had its rise.

The lateness of the period assigned to the foundation of the University of Dublin, is not to be considered as indicative of the ignorance or apathy of the Irish. It arose, not from their want of zeal to obtain such an institution, or abilities to adorn it, but from the unhappy circumstances of the time.--Clement the Fifth, in 1312, then in the seventh year of his pontificate, issued a bull upon the application of Archbishop Lech, "for the foundation of a University in Dublin;" but the death of the Archbishop prevented the fulfilment of the design. This was, however, effected in 1320, by Alexander de Bicknor, in St. Patrick's Church; but it declined and fell from the deficiency of funds. Thus, at a period when literature, rich with the stores of time, unfolded her treasures to expectant nations, Ireland, predominant over" every other in the desire for similar advantages, could only boast the memory of plans for their possession. But the ministers of Elizabeth were equal to the spirit and the wants of the time: their desire was to base the government upon the interests and affection of the people. By their advice, and the concurrent patronage of Elizabeth, Sir John Perrot was appointed Deputy, or Governor of Ireland. He was a man of liberal feelings, and enlightened views; he saw the connection of the countries was founded upon reciprocity of interests, which would be best promoted by an asylum for learned men, from whence they might diffuse through society the benignant influence of liberal instruction. His plan was to dissolve the cathedral of St. Patrick, and appropriate the revenue for the foundation of Universities. His purpose, according to Ware, was "to have settled six masters in each of the colleges, and one hundred scholars to be instructed in learning, civility, and loyalty." But the influence of Archbishop Loftus, supported by the interest of the Lord Keeper, who concealed their cupidity under the plea of profanation, retarded its erection by the disgrace of Perrot. It is difficult to elicit the cause for which Perrot was continually pursued by the maliciousness of Loftus; but Rawlinson, his biographer, has preserved a letter from Elizabeth, written with all the pride of a Tudor, and the imperiousness of a woman, desiring the Archbishop to forego his hatred, in obedience to her. But although Sir John Perrot was deposed, Elizabeth did not abandon the undertaking, and the Archbishop was desired to devise a plan for the realization of its advantages. There was, at that time, belonging to the corporation of the city, a piece of ground which had formed the scite, ambit and precinct, of the Augustinian monastery of All Saints, a priory of Aroasian Canons, founded in 1166, by Dermot M'Murrough, king of Leinster. These buildings were in ruins, but were apparently well calculated for the purpose. The Archbishop immediately applied to the Mayor and Common Council, and addressed them with an eloquence so "pathetic," as to obtain the monastery and lands tor the purposes explained. The formality of petitioning the Queen for "her Charter" was performed by Henry Usher, which was, of course, complied with; and on the 3d of March following, letters patent passed the Great Seal for the erection of a University, called "COLLEGIUM SANCTAE ET INDIVIDUAE TRINITATIS JUXTA DUBLIN--A SERENISSIMA REGINA ELIZABETHA FUNDATUM."

By this instrument, one Provost, three Fellows, and three Scholars, were appointed in the name of more. These were, Adam Loftus, the Provost, Henry Usher, A.M. Luke Challoner, A.M., and Launcelot Moyne, A.B. for Fellows, and Henry Lee, William Daniel, and Stephen White, as Scholars. The attention of its founders was now directed to the provision of a sum for its support; but the state of the country was but little favourable to this--incessant wars had barbarized the people, and continued exactions had impoverished them. There was, indeed, a momentary calm; but it was the stillness which foretells commotion. Nevertheless, on March 11, 1591, Fitzwilliam, the Lard Deputy, and the Privy Council issued circular letters for the furtherance of their views; but the amount received was apparently inconsiderable, as Robert Taaffe, its collector, complains of the unsuccessful results of his application. On the 13th of March, 1591, the first stone was laid by Thomas Smyth, then Mayor, and on the 9th of January, 1593, the first students were admitted. Nothing but the zeal and interest of Archbishop Loftus could, however, have sustained the institution during the civil war, which now spread its destructive violence around. He made its necessities a consideration of state; and obtained a "Concordatum of forty pounds per annum, and an allowance of six dead payes (morte payes) out of such cheques as should be imposed on her Majesty's army." This grant was subsequently repeated, and largely increased by the liberality of Elizabeth, who watched over the institution with a zeal alike honorable to her station and her mind.