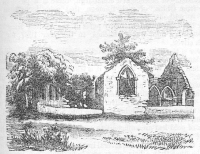 PERHAPS, in all Ireland, there is not a town so inconsiderable in itself, and yet possessing two such remarkable mementos of its former greatness, as Roscommon, the assize town of the county of the same name. On one side, towards the north, stretch the ruins of its magnificent castle; and, on the southern side, in the midst of rich green meadows, and embowered in large old ash trees, stand all that remains of the once beautiful abbey, founded here in the year 1257, by King Phelim, for ecclesiastics, with the tomb of its royal but ill-fated founder still to be seen on the right of the high altar; he died 1265. On comparing the above sketch with that taken by Grose, and published in his 'Antiquities,' it will be found that since his time much of the walls have crumbled away, though it must be confessed that the trees which have risen in the interim fully compensate the old building for whatever it may have lost otherwise. There are no remains of a southern transept visible, and the window in the north, which, in Grose's time, retained a good deal of its tracery, is now quite denuded of that ornament; in the great east window, however, enough remains to show that at one time the finishing must have been beautiful; the Gothic mullions of this window, as seen from the inside, present a strikingly handsome appearance, standing out in bold grey relief from the deep close background of ivy, with which the whole outside of that gable is richly and exuberantly dollied. The choir seems to have been lit also by a number of tall narrow windows, some of which are still visible under the coat of ivy.

Of the castle, of which the following is an illustration, there is roofed except one of the round towers, that to the left of the view, in which there is still a spacious oval apartment, the height of the structure, and vaulted over head, said to have been a council chamber. At the earliest periods a castle stood on this site, which, being in ruins, in the year 1268, was then rebuilt, in its present shape, by John D'Ufford, Justiciary of Ireland. The walls surrounded a spacious area, now converted into a paddock, and were immensely thick, as may be seen from some massive fragments which lie scattered around. A large Norman tower stood at each angle, but the one alluded to is the only one in the building in anything like preservation. Tradition says that this once splendid stucture was not utterly ruined until the period of the wars between James and William.