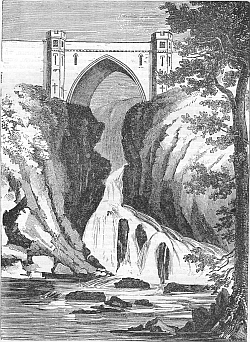 POL-A-PHUCA, or Poul-a-Phouka, situated near Rusborough, county of Wicklow, is a remarkable waterfall formed by the ponderous and rapid descent of the whole body of the river Liffey. The name signifies "The Devil's, or Daemon's Hole,'' it being an immense whirlpool whose depth has never yet been ascertained. The water is drawn by a suction, the power of which nothing can resist, to the edge of a craggy precipice, where the rocks are divided into several distinct falls, in the manner of a stair-case. The breadth of the opening through which the water falls is but forty feet, and the height of the entire, from the upper stage beyond the bridge to the lower level, about one hundred and eighty. The quantity of water is not generally sufficient to confer grandeur on the scene, but after rainy weather it presents a noble picture; the mass of water is then considerable, and the fall of such a quantity over a declivity of this kind is a magnificient object; the roaring of the cataract may be heard at a distance of some miles. The abyss into which the water is precipitated from such a height exhibits the appearance of a frightful vortex, into which all bodies that come down the stream are attracted with astonishing force and velocity. The perpetual agitation of the water in this whirlpool, which is circular, forms an eddy which has been compared to the celebrated Maelstrom, or "Navel of the Sea," off the coast of Norway--a phenomenon which it was once supposed no vessel dare approach, lest the indraught should bury the unfortunate navigators in the abyss.

Pol-a-Phuca bridge consists of one Gothic or pointed arch, springing from rock to rock across the chasm through which the water rushes. The span of the arch is sixty-five feet, and the keystone is one hundred and eighty feet above the level of the river ; there is a natural basin beneath the arch, in which it is said an unhappy tourist once met his fate, having fallen from the rock above. Mr. Brewer, in reference to this waterfall, says: "this cataract is unquestionably the most picturesque and pleasing of any with which we are acquainted in the county of Wicklow. The single burst of the fall at Powerscourt produces astonishment in an unusual degree, and many adjacent circumstances are truly attractive. But Pol-a-phuca does not depend on a first impression for its influence over the feelings ; its charms give greater exercise to the imagination, and afford a variety of pictures, independent of the general display."