The Arms of O'Neill

We present our readers to-day with the "arms "of this famous Irish family. Hardly any other name is so thoroughly linked with the fortunes of Ireland as the princely race of O'Neill, whose origin is well nigh lost in the mists of antiquity. 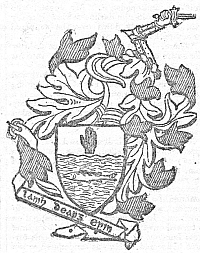 Per fesse wavy, the chief argent charged with a sinister hand, couped at the wrist and erect gules; the base, waves of the sea proper thereon, a pike fish naivant of the last.

It is traced by Irish annalists to the prince-professor of learning, Neill, A.M. 1800, son of Phenius Pharsu, King of Scythia, whose posterity arriving in Spain, Milesius, 21st in descent from him, became king of the Northern provinces; and his Queen Scota and sons about 1200 B.C., led a colony of Milesians into Ireland, where Heremon, the youngest, became the first monarch.

Niall the Great, 53rd in descent from Heremon, became King of Ireland, A.D. 388. He subdued the Picts and Britains; and, after ravishing the coasts of Gaul, was assassinated on the banks of the Loire. His army, on its return, carried off, among other captives, St Patrick, the patron saint of Ireland. For upwards of 600 years afterwards, Niall's descendants exclusively occupied the throne of Ireland. Three descendants of his posterity were named after him; Niall II. (surnamed Frassach), who died 770; Niall III (surnamed Caille), drowned in the River Callan, 897; and Niall IV (surnamed Glundubh, or black-knee), killed in battle by the Danes, 954.

King Mortough MacNeill, who died 1168, was the last native monarch of Ireland of the Hy-nialls. Hugh Duff O'Neill, "Senior of the Race," King of Ulster, who died 1230, was ancestor of the O'Neills of Clanaboy.

From his brother, Prince Niall Roe, descended the O'Neills of Tyrone. And from the latter descended Shane O'Neill, and Hugh Earl of Tyrone, who both waged war against Queen Elizabeth; and Sir Phelim Roe and General Owen Roe O'Neill of 1641.

In 1573, Bryan MacPhelim O'Neill, Prince of Clanaboy, entertained the Earl of Essex at a magnificent banquet in his palace, but his treacherous guest during the stay had the place surrounded with soldiers, seized his unsuspecting host and hostess, and his brother, and had them executed. So flagrant a breach of faith and hospitality, it is said, shocked even the "Virgin Queen" herself, who disavowed it.

The last of the old race of chieftain's fled from Ireland with O'Donnell Prince of Tyrconnell, and his dust reposes under the high altar of one of the most famous Basilicas of Rome, St Peter's Montorio.

For further particulars of this princely and gallant line see "The Flight of the Earls," by Rev C. P. Meehan, and the "Life of Hugh O'Neill," by John Mitchel.