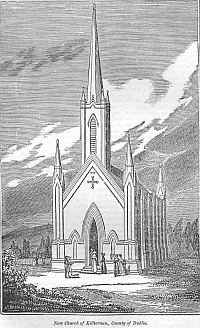 In the prefixed engraving we present our readers with a view of another of the new churches, erected within a few years in the County of Dublin. Its style is the same new and fantastic Gothic observable in all those structures, but as its pretentions are less, its faults are possibly fewer, and, in its general form, it is an appropriate as well as pleasing feature in the quiet and romantic sqenery in which it is situated. It has a stone roof, and is built entirely of the granite of the district, a beautiful material, the value of which has been only recently appreciated.

Killternan, or properly Kill-Tiernan, the church of Tiernan, is a very ancient parish, and its original church, a small but picturesque ruin of the earliest Christian times, still exists, and is situated about a quarter of a mile from the new edifice. The parish is at present a vicarage in the diocese of Dublin, and is now united to the old parish of Kilgobbin, which was latterly a curacy, and in which the church, which till lately served for both, was situated. It was taken down on the erection of the present building.