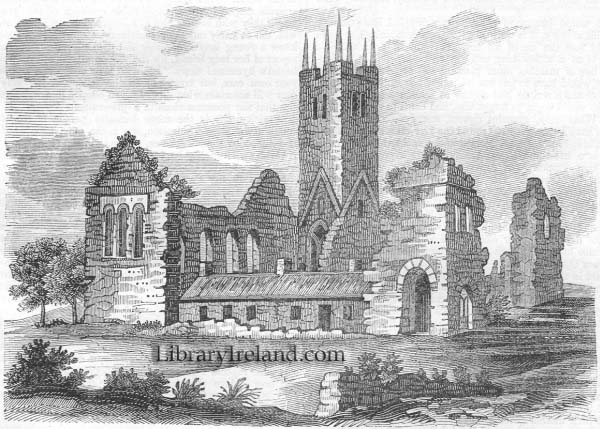 THIS religious edifice was originally founded by Donough O Donoughoe, King or Prince of Ossory in the year 1180, for Cistercian Monks. The ruins are situated on the river Nore, about two miles from Thomastown, and are very extensive, occupying nearly three acres of ground. The church was a cruciform structure, and consisted of a nave the roof of which was supported by a range of six pointed arches, with a corresponding number of massive columns. Above and between these pointed arches are the remains of six clerestory windows, narrow and rather rounded at their tops. The western or great window of the nave consists of three distinct arches, separated from each other by a single mullion with rounded tops also. The steeple, which is over the cross of the transept, derives its support from four massive square pillars and the arches which spring from them. The two arches of the transept and that belonging to the nave are of the pointed form: the arch which leads to the choir or chancel is secular.

This singular deviation in point of form between them makes it very probable that the choir was the work of a different period, although the eastern or altar window, which is now built up to a smaller dimension, is also of the pointed form. Such an anomaly in the character of its architecture, can only be accounted for, by the supposition that it was built about the period when these styles--the circular and the pointed--were undergoing that change which occasioned the one to supersede the other. The roof of the choir is a circular arch of stone, quite perfect and in the chancel, sculptured in rude, though bold relief, opposite to the grand altar of the south cross-aisle, stand the remains of a tomb, upon which repose a male and a female figure habited in the costume of the twelfth or thirteenth century. This monument is said to have been erected for Donough King of Ossory, founder of the Abbey, who died and was here interred in the year 1185. The male figure holds in the right hand, which reposes on his breast, the fragment of a crucifix. The left hand is directed towards a small harp, that hangs from his left side. The base of the monument is cut into compartments in which are seen various images of the apostles. Two crowned figures appear at he foot of the monument, standing beside a kneeling angel whose hands are uplifted in the act of fervent prayer. Most of the figures wear long beards and appear to be singing or laughing.

On a tomb of black marble lies the full length statue of an abbot in his proper habit. In the left hand he holds a crosier, the volute of which contains an Agnus Dei well sculptured. The right arm is uplifted and the two first fingers and thumb are raised, as if in the act of swearing an oath of fidelity, or of some very serious kind, in the manner that is to this day practised on parts of the continent. A serpent or monster gnaws at the lower end of the crosier. The head of the statue reposes upon a pillow of much elegance. The inscription is illegible.

A second ancient monument of a religious person sustains a statue, executed with conspicuous talent and delicacy. The crosier is of excellent workmanship and in the right hand is a sprig of trefoil, emblematic of the Trinity. The table, or altar slab, on which this figure reclines, is covered with trefoils and roses.

Several other disfigured monuments of ecclesiastics may be discovered amidst the rubbish with which the Abbey-church is now choaked up.

The roof of the steeple over the cross transept, is curiously groined with springers, that are supported on each side by corbels of a neat ornamental form. The nave and transepts are uncovered.