The curious piece of gold, represented in the annexed engraving, which is copied from Harris's edition of Ware's Antiquities, derives no small interest from the singular and romantic circumstance which led to its discovery, of which the following account was published by Bishop Gibson, in his edition of Camden's Brittania, in the year 1722: 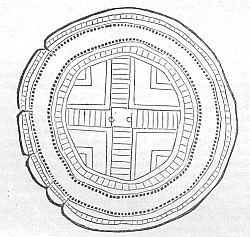 "Near Bellishannon (Ballyshannon) were, not many years ago, dug up two pieces of gold, discovered by a method very remarkable. The Bishop of Derry happening to be at dinner, there came in an Irish harper, and sung an old song to his harp. His lordship, not understanding Irish, was at a loss to know the meaning of the song; but, upon enquiry, he found the substance of it to be this, that in such a place, naming the very spot, a man of a gigantic stature lay buried, and that over his breast and back were plates of pure gold, and on his fingers rings of gold, so large, that an ordinary man might creep through them. The place was so exactly described, that two persons there present were tempted to go in quest of the golden prize, which the harper's song had pointed out to them. After they had dug for some time, they found two thin pieces of gold, exactly of the form and bigness of the cut represented above.

"This discovery encouraged them next morning to seek for the remainder; but they could meet with nothing more. The passage is the more remarkable, because it comes pretty near the manner of discovering King Arthur's body by the directions of a British bard, (in the reign of King Henry the Second.) The two holes in the middle of the piece seem to be made for the more convenient tying it to the arm, or some part of the body."

"Doubtless," Harris adds, "his lordship had good authority for this relation, and nothing can call it in question, but that the rings, mentioned in the song, were not found as well as the plates. But that particular, as well as the size of the man, might have been introduced by the bard as a partial exaggeration, by means of the Bara or Animi impetus of that sort of people."--Antiq. vol. II. p. 126. 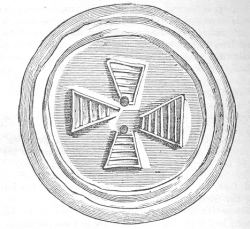 The prefixed wood-cut represents another piece of gold of the same description as that given by the Bishop of London. It and another similar were found a few years ago in the County of Roscommon, and is now in the cabinet of the writer. We have also seen some others of the same kind, and believe they were used as ornaments on the back and breast of the kings and nobles in the early ages of Christianity in Ireland. The figures of the kings, sculptured in relievo on the great stone cross at Clonmacnoise, are represented with round plates of this description, placed upon the breast.