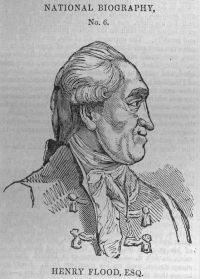 The Right Honourable Henry Flood, one of the most eminent and talented members of the Irish House of Commons, during a most eventful period of its history, and who bore a distinguished part in the establishment of its independence in 1782, was the son of Warden Flood, of Flood Hall, in the county of Kilkenny, Lord Chief Justice of the King's Bench, and was born in 1732. His mother's name was Whiteside, but of what family we are not aware. Little is recorded of his early life, save that he was at first a student at Trinity College, Dublin; and from thence went to Christ Church College, Oxford, where he was placed under the tuition of Dr. Markham, who afterwards was Archbishop of York. It is said, that while at the University of Dublin, he had been by no means remarkable for his attention to his studies, and that soon after his removal to Oxford, he applied himself most diligently to the ancient classics; and, certainly, translations which he left of many of the speeches of Demosthenes, and Eschines, as well as of a few of the Odes of Pindar, indicate a thorough and intimate acquaintance with the Greek language. In 1752, he obtained the degree of A. M., at the University of Oxford, and soon after returned to Ireland.

He took his seat in the House of Commons for the first time, in 1759, as member for the county of Kilkenny, which he represented for many years; he afterwards sat as member for the boroughs of Callan, and Enniskillen, successively. He soon became one of the most prominent leaders of the opposition, and distinguished himself by amazing powers of eloquence. His first oratorical effort in Parliament was eminently successful; we are told he was universally applauded. The celebrated Primate Stone, then an old man, happened to be in the House, and not knowing, at first, which side of the question the speaker purposed to take, declared, in a patronizing way, that "he had great hopes of him;" but when in the course of his speech, the young orator took occasion to pass some strictures on the political conduct of the old and wily statesman, he seems to have changed his opinion very quickly; for on Flood's sitting down, his Grace said, emphatically, "that a duller gentleman he had never heard." Though not, perhaps, as brilliant in style as some of his contemporaries, his speeches were never surpassed in point of vigorous and commanding language, or of logical and argumentative arrangement. His attacks on the Ministry were of the most powerful kind, and he was long regarded as one of their most formidable antagonists.

On the 13th of April, 1762, he married Lady Frances Maria Beresford, daughter of Marcus, first Earl of Tyrone, but they never had any children. In 1764, his father died, having continued to hold his high judicial office up to that time.

For many years Mr. Flood co-operated with the Whigs, and was mainly instrumental in procuring the repeal of Poyning's Law, the passing of the Octennial Bill, and several other popular acts of Parliament. In 1775, to the astonishment and regret of his former associates, he took office under government, and joined the administration of Lord Harcourt, then Lord Lieutenant, as one of the Vice-treasurers of Ireland, and presently after was admitted to the council board both of this country and Great Britain. Various motives have been attributed to Flood for this step. It was asserted by some that his estate had become embarrassed by the expenditure of money in the contested election, and that an addition to his income had in consequence become very desirable to him. On the other hand, it has been more charitably suggested that he hoped by accepting a high and influential office, to be able to effect more in forwarding those measures he had before advocated. If this were the case, he soon discovered his mistake, and found that, so far from being called on to take a leading part in Parliament, it was now expected that his former activity should rather subside. After continuing in office for about six years, he again joined the ranks of the opposition, and was received by them with open arms. In 1782, the independence of the Irish legislature was achieved by the repeal of the obnoxious statute of the 6th Geo. I., which declared--" That the kingdom of Ireland ought to be subordinate to, and dependant upon the Imperial Crown of Great Britain, and that the Parliament of England had power to make laws to bind the people of Ireland." But in Mr. Flood's opinion, the simple repeal of the act was not sufficient to prevent England from putting forward a similar claim to legislate for Ireland, founded upon the principle of that statute; and in this he differed with most of the opposition. His conduct in injudiciously forcing forward a scheme of Parliamentary reform, further tended to widen the breach. He had taken a leading part in the proceedings of the well-known Convention of 1783, and having prepared and submitted to it his plan of reform, he proceeded in the House of Commons to move for leave to bring in a bill to that effect. It is said, that at this time he looked forward to a seat in the British House of Commons, which he soon after obtained; and conceiving that his views would be powerfully aided by his exertions in the Convention, as well as in the Irish Parliament, he was desirous to take the lead in this measure, in the expectation that he would thereby obtain superior weight and influence with the Reformers in England; accordingly, without obtaining the concurrence or co-operation of, almost, any of the other members of the opposition, he hurried on the measure, which, after a most stormy debate, was, as might have been expected under these circumstances, rejected by a considerable majority.

About this time a personal dispute, the most severe and acrimonious in its nature, of any on record in Parliamentary history, took place between Mr. Flood and the celebrated Henry Grattan. It would seem that the attack was begun by Flood, who intemperately alluding to the national grant made to Grattan for his eminent services to his country, had most unjustly stigmatized him as a "mendicant Patriot, who was bought by his country, and had then sold his country for prompt payment." This produced, from Grattan, a retort in a strain of the most caustic and powerful language that could be imagined; in which thinly veiling his vituperation of his antagonist, under the semblance of attacking a suppositions character, with the most pointed direction of look and gesture, he continued to pour forth on Flood, the severest and most personal invective. Flood, in a state of great excitement and agitation, stood up to reply, but speedily so lost himself and became so much out of order, that the Speaker, at length, interfered. He declared, it had been with the utmost pain that he had suffered the debate to proceed so long in that manner--and that nothing but the repeated calls of the House, to hear both members, would have induced him to remain silent so long--and he then entreated Mr. Flood to sit down; with which request he thought it best to comply, and soon after retired from the House. The Speaker immediately issued his warrant for the apprehension of both gentlemen, and they were accordingly taken into custody next morning, and bound over to keep the peace. Some nights after Mr. Flood was permitted, though not without some opposition, to deliver a long and able speech, in which he entered into a defence of his conduct through the course of his whole political life.

Before the close of that year, he became a member of the House of Commons of Great Britain, a representative for the borough of Winchester; and at the same time was member in Ireland for Kilbeggan, which borough he continued to represent till the year preceeding his death. He never seems to have attained the same degree of influence or consideration in England, that he had held in the Irish House of Commons. He was unfortunate, we are told, in his first essay there: having ventured, depending on his practised talents as an orator, and general information and reading, to speak on a subject with the details of which he was almost totally unacquainted--the affairs of India--the inevitable consequence of which, was a signal failure. He, however, afterwards retrieved his lost credit by several excellent speeches on other measures, especially cm Parliamentary Reform; one which he made on that subject, in 1794, and which at the time elicited much approbation from Mr. Pitt and others of his party, as well as from Fox, who declared the scheme to be the most rational that had ever been brought forward, was republished in 1831, together with his reply to Mr. Windham, in the course of the same debate.

A bequest which Mr. Flood made of his estates, of the value of about £5000 per annum, to the University of Dublin, to take effect after the death of his wife, for establishing Professorships for the encouragement of the study of the Irish language and history, and for the purchase of books and manuscripts, was the subject of much discussion, and afterwards litigation. An able pamphlet was written in its defence, by his friend Lord Rosse, then Sir Laurence Parsons. To shew that Mr. Flood was by no means singular, in his opinion, on this subject, he gives, in a note, a letter from Dr. Johnson, to Charles O'Connor, the Irish antiquarian, in which he strongly expresses his approval of the design of instituting an inquiry respecting the ancient literature of Ireland. It appears, also, that the celebrated philosopher, Leibnitz, declared, that in his opinion, the study of the Irish language should be prosecuted diligently; the effect of which would be to perfect, or at all events, greatly to promote the knowledge of Celtic literature. The validity of Mr. Flood's will was contested by his cousin and heir at law, Mr. John Flood, of Flood Hall, who after protracted litigation, was successful in establishing his claim to the large estates, devised for the purposes we have mentioned, and the bequest to the University of Dublin, in consequence, became void.

In person. Mr. Flood was tall and slight: his countenance, though striking and indicative of his commanding intellect, bore little trace of the beauty, which it is said, he had possessed in early life. His manners were highly polished and courteous; and his style of oratory not only nervous and argumentative, but highly classical and ornate. In conclusion, to use the words of a contemporary of his own, "He made a conspicuous figure in the annals of his country, and was entitled to the respect of every public-spirited man in it; for, unquestionably, "he was the senator who, by his exertions, and repeated discussion of questions, seldom, if ever, approached before, first taught Ireland that she had a Parliament."