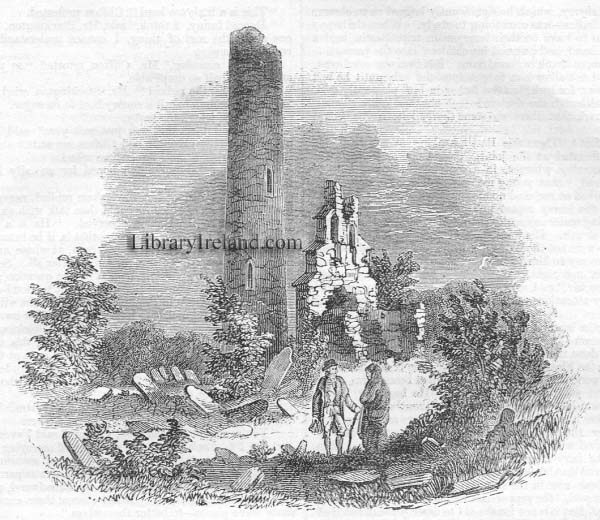 DONAGHMORE church and Round Tower are situated a little more than a mile from Navan, on the road to Slane. This religious establishment, which was anciently called Domnach-mor muighe Echnach, owes its origin to St. Patrick. But though the existing ruins of the church of Donaghmore sufficiently indicate it to have been a structure "diminutive in size," its architectural features clearly prove that it is not the original church of St. Patrick's erection, but a re-edification of the thirteenth century, in the usual style of the parish churches erected by the Anglo-Norman settlers within the Pale. Neither can the Round Tower, though unquestionably a structure of much higher antiquity than the present church, be referred to the time of the Irish Apostle, or perhaps to an earlier age than the ninth or tenth century. At all events, its erection cannot be ascribed to an earlier date than that of the Tower of the church of Kells--a religious establishment founded by St. Columbkille in the sixth century--as these towers so perfectly agree in architectural style and mason work, that they appear to have been constructed by the same architects or builders. This very beautiful tower is built entirely of lime-stone undressed, except around the doorway and other apertures, and is of admirable masonry. It has two projecting ledges or steps at its base, and six rests for storeys, with intermediate projecting stones, or brackets, in its interior. These storeys are each, as usual, lighted by a single aperture, with the exception of the upper one, which has two openings, one facing the east and the other the west.

The Irish Round Tower: Origins and Architecture Explored

The seventy-three known round towers are catalogued in the Inventory section, county by county, with photographs of each.

Other Round Tower articles online