The following memoir of an individual, comparatively speaking obscure, whom Nature, in a freakish moment, sent into the world scarce half made up, is, we think, of value, as affording a striking instance of the triumphs which may be achieved by mental energy and perseverance over defects apparently the most insuperable, and further, as an interesting example of the power of mental worth in attracting the friendship and regard of the good and estimable portion of mankind, in defiance of the greatest repulsiveness of appearance, and even bodily deformity. It presents strong evidence, also, that, even under the most adverse circumstances, much real enjoyment of life is within the reach of every human being; while thousands, nevertheless, in every class of society, to whom Nature has been profuse of her gifts, even to prodigality, eke out, from day to day, a useless, joyless existence, and finally quit life without having obtained as much respect from their fellow-men, or possibly as large a share of true happiness as fell to the lot of the lowly subject of this notice. 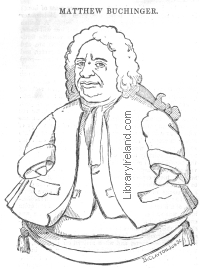 Matthew Buchinger was born in Germany, without hands or feet, on the 3rd of June, 1674. He came over to England, from Hanover, in the retinue of George the first, with whom he expected to have ingratiated himself, by presenting to his Majesty a musical instrument of his own invention, resembling, we believe, a flute, and on which he played with considerable skill. He hoped to have obtained some small pension, sufficient, at least, to support him without the necessity of exhibiting himself to the public gaze, to which he ever had an almost insuperable distaste. The King, however, was contented with sending Buchinger a present of twenty guineas, and so ended his hopes of court patronage. After remaining some time in England, he came over to this country, where he subsequently resided for many years, and finally died at Cork, at an advanced age, in easy circumstances, and much respected.

It would not seem that his body was of very diminutive size; he is stated to have been about two feet and a half high, although he wanted legs altogether from the thighs. His arms appear to have been short, and terminated each in a round muscular process. These knobs were the sole substitutes nature had given him for hands," and his dexterity in using them was most surprising, not only in writing, and drawing, and in making the pens which he used for these purposes, but also in playing at nine-pins, cup-and-ball, and in performing many sleight-of-hand or conjuring tricks. His musical talents must have been considerable. In one of his hand-bills, which we have seen, he advertised that he would perform on the dulcimer, hautboy, trumpet, and flute. He was exhibited in Dublin, in 1720, at the Crown and Anchor, in Sycamore Alley. In 1722, we find him in Belfast, and in 1737, again in Dublin. These dates we have taken from some very beautiful specimens of his drawing and writing, many of which have been preserved by the curious. One is to be found in the museum of the Royal Dublin Society. It purports to be a portrait of Jesus Christ, from an antique gem, sent as a present from the Great Turk to Pope Innocent VIII., and underneath is a translation of the well-known letter of Pub-lius Lentulus, Governor of Judea, in the reign of Tiberius Caesar, which assumes to have been written in the life-time of Christ, and in which his personal appearance and demeanour are described with interesting minuteness. The genuineness of this letter has always been questioned; indeed, it is generally supposed by the learned to be spurious.

Buchinger appears to have possessed a more cultivated and enlarged mind than might have been expected in an individual separated, in some degree, as he was by the untoward circumstances of his deformed shape, from ordinary social intercourse with mankind.

Notwithstanding, too, his reluctance to the manner of life from which he was compelled to seek his subsistence, he was rather of a sportive humour, and had great liveliness of spirits. He was much patronized by Dr. Peter Brown, Provost of Trinity College, and many other distinguished persons. A Mr. Francis Smith, a young gentleman then about nineteen or twenty, a student at the University, formed an acquaintance with Buchinger, and attracted by his intelligence and amiable disposition, used frequently to visit him. By a nephew of Mr. Smith's we have been obligingly supplied with most of the facts in this notice. The evident sympathy and regard of this young gentleman were very gratifying to Buchinger, who much enjoyed his society, and frequently related to him anecdotes of his early life. His parents, he said, were of humble rank in Germany, and, during his childhood, being distressed at his unnatural form, concealed him as much as possible; but at length, as he grew older, finding him an incumbrance, they bethought themselves of providing him with some employment, which should necessarily be a sedentary one, and, as he said, had at one time an intention of apprenticing him to a tailor; this, however, was possibly told by him in jest, as he added, jocosely, "they were forced to abandon this plan, as they could find no place for the thimble." He was thrice married, and had children by all his wives, in number fifteen. At one time, he showed Mr. Smith a tree of consanguinity he had amused himself in drawing, of which he formed the trunk, and his three wives the branches, and from these his children depended like fruit.

Possessed of a vigorous mind, he was so far from being reluctant to contemplate the idea of posthumous dissection, that he even enjoined Mr. Smith to claim his body, if his death should occur in Dublin, for the School of anatomy there , and, finally, Dr. Barry, of Cork, obtained his body after he died, and his skeleton is said to be preserved in that city.

We have heard that some of Buchinger's descendants were settled at Wexford some few years ago, but who did not bear his name, being descended from him in the female line; and that, not long since, one of them died, who was deformed exactly in the same manner as their ancestor, having been born without hands or feet--a fact of rather singular nature, as all the immediate children of Buchinger were as perfect as usual in their form.