Arms of the City of Dublin

TO THE EDITOR OF THE DUBLIN PENNY JOURNAL.

SIR,--Returning, a few evenings since, from the seashore, to the village of Raheny, my attention was attracted by a stone, carved in the manner represented above, built into the angle of a cottage belonging to George Papworth, Esq., architect. On inquiring, I found its origin was unknown, and that it had occupied its present situation time immemorial. I have since ascertained that it marks the boundary of the county of the city of Dublin, and was probably placed there to designate the extent of the Lord Mayor's jurisdiction in this direction. 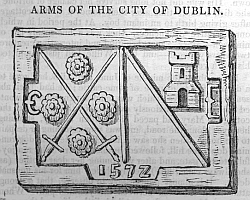 The arms represented are those of the Howth family (lords of the soil), viz.: argent two swords in saltire between four roses gules seeded vert, empaled with another escutcheon, bearing a bend or bendlett, with a tower in the dexter chief of the field--perhaps the ancient arms of the city of Dublin--the date 1572--the initials C. E. meaning, I suppose, Civitas Eblana.

Notices such as the foregoing may appear trifling to the general reader; but such shreds and remnants of the olden time are gems in the eye of the antiquarian. The science of heraldry speaks a language intelligible indeed to few, but valuable as being permanent, and not liable to change or mutation. Its study is so intimately connected with that of antiquity, that without a knowledge of the one, it is impossible to apply the other to its legitimate result, namely, the elucidation of history. In fact, armorial bearings may be called the hieroglyphics of history; and instances are not rare, in which the preservation of such rude emblazonments as the above, in the absence of more elaborate documents, has eventually been the means of the preservation of a property or a title; and perhaps after the lapse of centuries, this stone, insignificant as it now appears, may be referred to as the evidence of the ancient extent of the franchise of the