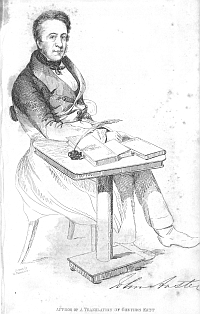 apt to give, and he does not want them now; for he is neither in the street, "cheapening old authors at a stall"—nor in Curry's, sporting witticisms too quick, fine and recondite for the ready apprehension of his friends—nay, nor yet at the admiralty, registering wrecks or computing salvage: but in his study. Neither is he there engaged in tracing facts or hunting up authorities; nor in the throes of composition; nor in the after-pains of polishing, to the nicest aptitude of expression to thought, his "true-torned and well-fyled lines." In none of these tasks is the contemplative poet engaged; but he has obviously been reading the SECOND PART OF FAUST; and meditating, perchance, a transfusion of it into his native language, he is searching where that "well of English undefiled" may be discovered whose bright surface shall faithfully reflect the beauties of the renovated Helen, and whose transparent depths refract without distortion the mystic wisdom and imaginative philosophy of his German original. And so occupied we shall leave him to his studies.

Mr. Anster is a southern—a native of that province (Munster) as noted for the genius of her sons as for the sturdy turbulence of her submission to the rule of the Saxon. The family were early settlers on the borders of the counties Limerick and Cork. Adherents to the last of the Stuarts, they were sufferers in the reverse of his fortunes. Lest, however, the rival counties should hereafter contend for our poet's birth, we may as well settle the dispute beforehand, by stating that he was born in Charleville—wore his first jacket and trowsers in the poetical village of Bruree, (where the last of the bards held their latest convention)—and that if he have the Irish luck to die "convenient," some friendly hand will "lay his bones their kindred bones among," beneath the chancel of the venerable parish church of the ancient town of Kilmallock.

But nimbly as we have jumped from his birth to his burial, Mr. Anster is not of the number of whom nothing can be recorded but that they were born and that they died. He has created an intellectual progeny which have familiarised his name to the literature of the present generation; and it is fully within his power—health and poetic ease conspiring—so to confirm his title as to make it "renowned among the posterities." His earliest production, published during his under-graduate course in the Irish University, (of which he was an honoured alumnus), ranks high amongst the best juvenilia which our literature can show. We know few things of the kind more sweet and touching than his "Home" and "The Poet's Haunt." Many of the pieces in this small collection, together with others of greater length, and some translations from the German, were re-published in a larger volume in 1819. In 1837 Mr. Anster published another volume of poetry, under the title of XENIOLA. The translations in this volume, and in that of 1819, are the only versions (with the exception of his great work) from any foreign language which he has given to the world.

But the highest honours he has yet achieved are connected with the FAUST. He was the first who introduced this singular poem to the literature of England: and we doubt not that his complete translation will be the last which English literature will eventually require or permanently tolerate. In Blackwood's Magazine for June, 1820, appeared those fragments of a translation which surprised the English public with the beauty and force of the original, and fired Shelley into a generous competition. Goethe was then alive, and did not withhold his recognition of their vigour and truth. These extracts were reprinted in England and America, and their success suggested to Dr. Anster the propriety of completing the work, and publishing it with his name—a- task which he happily completed in 1835. In the interval, many translators of parts, or the whole, in prose or in verse, have "strained at the bow of Ulysses;" but (with the exception of Lord Francis Egerton's version, which, though not complete, is often elegant and sometimes true) Anster's and Hayward's (in prose) alone are of the slightest value. It appears to be the nature of Doctor Anster's mind to throw itself entirely into the subject on which it is for the time engaged. Thus the very effect which his author produces is reproduced by him; and, as the Edinburgh Review has said, his work (with a few improvements [?] which they suggest, but which we trust will never be adopted) is "amongst the few translations which, in any language, hold substantive rank in their own country, and are admired, cited and imitated in lieu of their originals." There is not, in our language, a translation of any work of length which produces so entirely the effect of original poetry on the mind; and this without the slightest omission of any image in the original which could with propriety be retained, and with little more of addition or expansion than was absolutely necessary for the purpose of explanation.

On the continent the book is frequently quoted in the same way that Schubarth and Ekermann are. But its value is far higher than that of any commentary on the original can be. It is as an English poem that Anster's Faust must be regarded; and it is really astonishing with what felicity thoughts, the highest and deepest in German theology, and the subtlest in their metaphysics, find adequate expression in our language; and how scenes which—if we look at any other exposition of them—seem shapeless as the most misty reveries of the Swedenborgians, assume shape and colour and life. In the first interview between the hero of the poem and the demon, the exorcisms of the conjuror gradually recovering from his perplexity—the half-heard whisperings and low chaunt of spirit-voices breaking in upon each successive charm—and the last song of the unseen spirits, where every phantom-image, each growing out of the last, or connected with it by the faintest and most delicate ties of association, is supposed to rise like an exhalation to each note of the enchanted music, and pass before the eyes of Faustus till they at length close in sleep—(that dreamy song best interpreted by Retzch's pencil, or Radzewill's music[1] "soft, as is the flying gossamer of a summer's evening"—

"Vanish, dark arches,
That over us bend,
Let the blue sky in beauty
Look in like a friend!"

all—all is of unsurpassed and almost magical beauty. The dialogue between the presumptuous magician and the Spirit of the Earth, and the after-scene, in which despair has subdued and fatigued the restless spirit of the unhappy Faustus into momentary calm, are given with great power. But it is not in the more serious passages, where the interest of the situation, and the readers' sympathy, once successfully awakened, are, of themselves, sufficient to sustain attention, that we feel surprise at the triumph achieved by the translator of this wonderful poem. The difficulties which we should have imagined insurmountable, and which vet have been completely overcome, are of another kind. In the character of Mephistophiles there are constant touches of humour, which are brought before the English reader with perfect fidelity. When it is considered how difficult it is to communicate any perception of the humour of one nation to another—how absolutely unknown Quevedo or Scarron are in translation, though Goldsmith translated Scarron—and how little, for instance, of the character of the original has ever been communicated by any translator of Rabelais, though few translators were ever equal to Urquhart,—and how every thing peculiar in Cervantes is lost or disguised by every one of his dozen of distinguished translators—we shall be better able to estimate what has been accomplished by the translator of Faust. The scene of wild dissoluteness in the wine-cellar at Leipsic—the bewildering dialogue with the perplext student coming fresh from the country to a German university, when the demon assumes the costume of a professor, and lectures on theology and logic and medicine—the same worthy person's account of the death of Martha's husband, where he keeps the poor wife's hopes and fears alive by the fugacious prospect of his having brought her a legacy—the mad chamberlain's arrangements for the witches' ball—are all given in the English Faustus as amusingly as any of the stories of Peter Pindar, or the metaphysical discussions in Hudibras; and it is really curious, in comparing Anster's translation with the original, to see how nearly literal it often is, and by what skilful touches—when literal translation would have plainly destroyed the effect of the original—that effect is, in some different way, produced.

Mr. Anster is the author of various essays on general literature, in prose, contributed to the magazines—written in an easy and pointed style. We may refer to his preface to the FAUST, for no unfavourable specimen of his characteristic qualities in this species of writing.

Of Anster's professional life we can only spare room to say, that he was called to the Irish bar in 1824. Whether owing to his supposed devotion to the Muses, (a quality that seldom finds favour amongst the acute practitioners of the law), or to a want of that confident address and flippant elocution essential to the success of a popular advocate, his advance at the bar has not kept pace with his talents as a man, or his large and varied acquirements as a lawyer. There are few men of sounder learning and judgment in his profession, nor any more habituated to close research and patient investigation: it is, therefore, a matter of surprise to his friends, that his practice has not been more extensive. But the plague of SCOTT is upon him. He is a poet, and must be content with immortality. The church, perhaps, had been more his element, had he thought it his vocation. But the die has been cast. The appointment which he holds in the Court of Admiralty is certainly unworthy of his talents. It was given and accepted, we apprehend, under a mistaken notion of its value. Since the decadence of the Court, the office is of little importance.

We cannot, perhaps, more appropriately close this sketch than with the following beautiful tribute of one true poet to the genius of another:—

"TO THE TRANSLATOR OF GOETHE'S FAUST.

"Enchanter! thou hast made the spell thine own,
Buried in silence with the mighty dead;
The wierd light from the wizard's grave is shed,
Dancing on rubied pane and pillared stone.
Hark! through the haunted choir the swelling tone—
That midnight chaunt of dolour and of dread—
A wailing from death's cold and startled bed:
And now 'tis woman's broken-hearted moan.
Margaret! poor child! thy choking sob I hear,
And the fiend's laugh rings wildly thro' the pile.
Margaret!—forsaken one!—The spell hath stood,—
And, in charmed might, enchanter! wins the ear,
Yea, and the heart of SHAKESPEARE'S own proud isle,
To grant—by Rhine's green wave meet rivalhood."